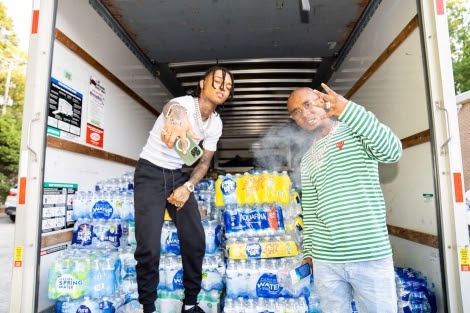 On September 14, Rae Sremmurd linked with Making Wishes Matter to organize a water drive for their fellow Mississippians, who are currently without potable drinking water. The rap superstars donated more than 2 trucks full with over 100 cases of water, 100 water filters to the elderly , and called on fans to pitch in too. Slim Jxmmiand Swae Lee then personally delivered the bounty to communities in need.

The hip-hop duo were greeted by friends and fans, who turned out in droves to help the cause. Jxmmi shared a video from the event on Instagram to spread the news. “We are at the truck,” he said. “We got plenty of water, man! Shoutout to everybody [who] came out, got down. Lots of water. We comin’ to Jackson. Let’s get it.” This crisis is the result of the Pearl River flooding in August — an event that left more than 150,000 residents scrambling for drinking water.

Rae Sremmurd’s community outreach comes after the pair dropped the singles “Community D***” and “Denial,” their first song together in more than four years, earlier this year. Prior to that, the brothers made a name for themselves as the preeminent harmonizers of hip-hop, racking up numerous hits beginning with 2014’s “No Flex Zone.” Their first two albums, 2015’s SremmLife and the following year’s SremmLife 2, were each certified Platinum, and the latter spawned the group’s first No. 1 hit, the Gucci Mane-assisted “Black Beatles.”

SR3MM, a groundbreaking triple-disc effort that saw each brother get his own LP’s worth of space to work solo, arrived in 2018. The rap duo’s long-awaited followup, Sremm4Life, is expected later this year. In the meantime, these Mississippi boys are getting back to their roots and helping out the communities that shaped them.