Omarion Kicks the Rest of B2K Out the Group and Announces Own Tour ft. Bow Wow, Loyd and Others

We didn't know that the successful Millennium Tour that took place earlier this year would have a second leg, but lo and behold, it does!

As you can see, the rest of B2K won't be present, and it could stem from the drama that ensued between O and his group members regarding baby mama betrayal. But "unbothered" O had some tricks up his sleeve, announcing the tour sans the rest of his B2k members on the birthday of group member Lil Fizz, who linked up with O's Apryl Jones.

Earlier this year, B2K reuinited to headline the first Millennium Tour. Mario, Bobby V and Chingy were among the lineup. 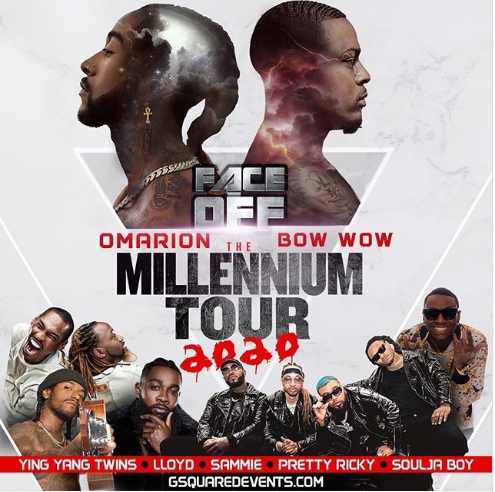 We are so excited to announce The Millennium Tour 2020! 🙌🏾 Come rock with @omarion @shadmoss, @therealyingyangtwins @curlyheadedblackboy @sammiealways @prettyricky and @souljaboy! Tour cities will be announced on Monday, December 2nd.  Pre-sale starts Thursday, December 5th at 10AM local time.  Save $5 off the purchase of your ticket with Pre-sale code: PARTY.  Be the first to know by joining the tour’s email list and get tickets at 👉 GSquaredEvents.com.
#gsquaredevents #themillenniumtour2020 #omarion #bowwow #yingyangtwins #lloyd #sammie #prettyricky #souljaboy

The tour dates will be announced today (December 2). Pre-sale will begin on Thursday, December 5.