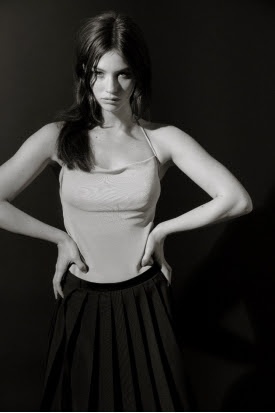 Acclaimed singer-songwriter Gracie Abrams shares her poignant and powerful new single “Where do we go now?” and its accompanying video. A gorgeously observed portrait of fading connection, “Where do we go now?” will appear on Abrams’s highly anticipated debut album Good Riddance.  Produced by Aaron Dessner of The National, Good Riddance will be released on February 24 via Interscope Records.

Produced by and co-written with her frequent collaborator Dessner, “Where do we go now?” finds Abrams documenting her emotional experience with more precision and impact than ever before. As she narrates the end of a fractured relationship and all the confusion, frustration, and longing that comes with it, the 23-year-old artist achieves a new level of lyrical honesty and self-possession — an element fully reflected in her quietly captivating vocal work. Set against a sparse but hypnotic backdrop of elegantly sculpted beats, the result is a perfect introduction to the unfettered introspection that infuses all of Good Riddance.

Directed by Gia Coppola (Carly Rae Jepsen, Blood Orange), the video for “Where do we go now?” cycles through a series of stunningly composed shots capturing Abrams in various states of emotional unrest. With its delicate interplay of shadows and light, the visual shifts from stark black-and-white to softly saturated color as Abrams wholly embodies the track’s whirlwind of feelings, ultimately pulling the audience even deeper into her interior world.

“Where do we go now?”  arrives as Abrams’s first new music since “Difficult,” an October release also produced by and co-written with Dessner. A shining example of the poetic realism at the heart of her songwriting, “Difficult” earned immediate praise from the likes of Rolling Stone, who hailed the track as “a candid look at the uncertainty that comes with growing up” and noted that “putting those feelings of anxiety about the unknown so eloquently is a skill that most of her peers are still refining.”

The Good Riddance Tour kicks off March 6 in Chicago at The House of Blues with Tiny Habits opening on all dates.  Along with performing in 14 cities across the U.S., Abrams will join Taylor Swift on select dates for her blockbuster Eras Tour.

Get Tickets for her tour: Purchase Here